Ledger initially wanted to do the Batman and took part in the audition but was rejected by the makers. Later, Nolan chose him for the Joker role because he found Ledger to be fearless just what the character wanted.

Ledger wanted to justify the role and make an original version of the joker.

He locked himself in a hotel room for six weeks and read all the comics in which joker appeared. This was where he improvised the horrific smile and attitude of the joker. 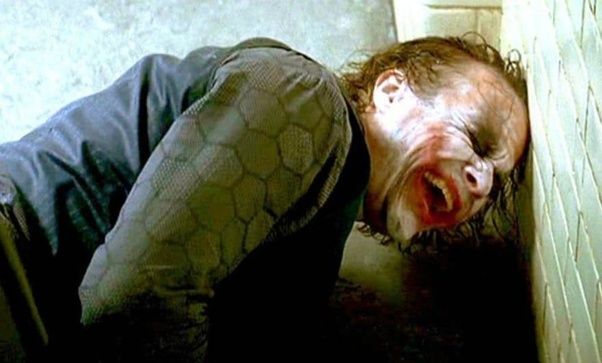 He did his own makeup. The regular makeup artist was not responsible for this look:

He wanted to make his own look as he didn’t want that to look like a professional’s work but of a madman’s. He went to a drug store and bought cheap makeup and literally did the make-up of his own. The director approved and it was the makeup team’s responsibility to recreate the look every day.

He carried “The Joker Diary” everywhere he went. The diary had a lot of disturbing messed up things, horrifying news, stories, pictures of blind babies and many more. He wrote the journal as if he was the joker and wrote all the things that joker might find funny. He used the journal to get mentally psyched up for the shooting day.

He improvised a lot in the movie… He did many unscripted actions that made it to the final cut, from the clapping scene when Gordon gets promoted, to the hospital blast scene. He transformed into the joker to improvise as the joker might have done. He wanted Batman to hit him as hard as possible for the famous interrogation scene. He wanted the scene to look real and went too far actually marking him, the make-up saved his real scars I guess. Superhero films have been notoriously overlooked by the Academy, especially in the acting and directing categories for ages. Despite this Ledger became the only person to win an Oscar for Best performance by an actor in supporting role (posthumously) by acting in a superhero movie.