Netflix has redefined entertainment for the upper-class youth. It has made sitting around and watching TV all day cool. While it has many a popular series under its belt, Stranger Things is one of its more popular works. And with 2 seasons now, it has not failed to enthrall audiences one bit.

Stranger Things is basically the journey of a group of children in a small town known for how uneventful and boring it happens to be. Nevertheless, these kids aren’t complaining. A series of unfortunate circumstances lead them to a never-ending adventure of a lifetime.

Here’s my take which will make you watch Stranger Things right after you complete reading.

Age is just a number

I absolutely loved the fact that children are the protagonists of the show. Their characters show a lot of depth and sensibility for their age, far more than their older counterparts, debarring the saying – Age Brings Wisdom.

Not just their maturity but also their experiences and their background adds to their personalities. It also highlights an aspect we adults often disregard – kids have issues too! Their problems are real!

While it is unlikely to find a whole group of children going through serious problems, nevertheless, social issues such as divorce, unhappy marriages which lead to unhappy parents, abuse do exist. Stranger Things throws light on how in times of difficulty adults and children need to be approached with care and love.

They shed light on the various kinds of abuse a child could face. Child abuse almost always makes people expect the worst: sexual abuse. The other kinds are often ignored to the point they aren’t even considered abuse. Corporal punishment? “Oh, that’s just how we discipline kids around here”, Pressure to perform better? “Oh, but parents only want what’s best for their children”. These are all kinds of abuse and harassment and can cause irreversible damage to child’s mental well-being.

Its portrayal of various social issues was subtle and didn’t feel forced at all. It was only days after watching the last episode that I realized the matters it had touched upon. 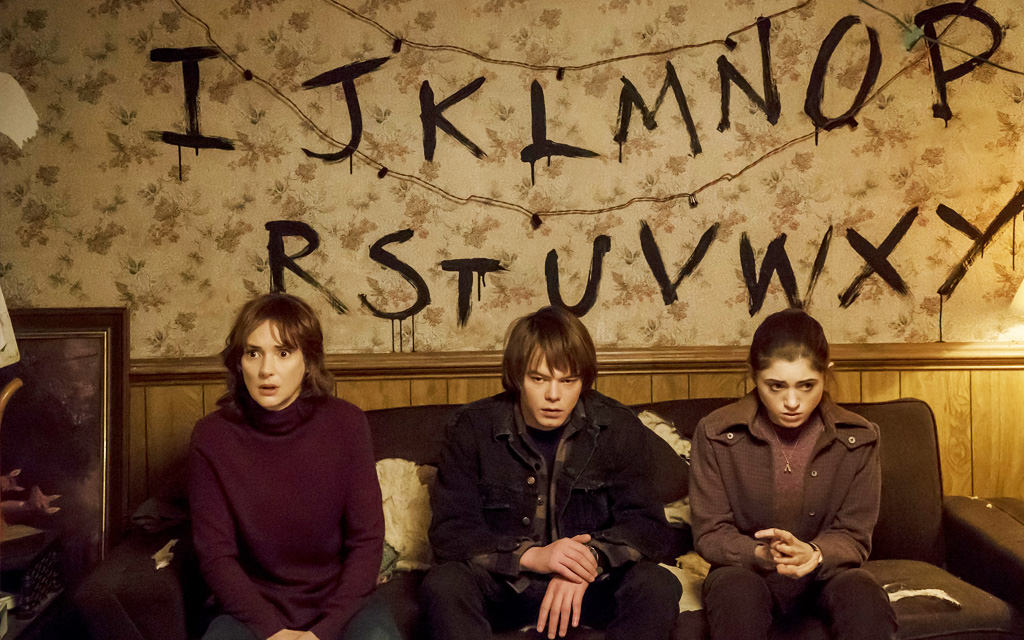 This was the element that kept me hooked from episode 1. The whole story is shrouded in mystery! After watching 2 seasons, I still have a tonne of questions. What’s amazing is you’re never exhausted by the constant cluelessness. The second a plotline is clarified it opens up a whole new set of possibilities that keep the show going.

While there are a few trivial aspects that seem very cliched, the unraveling of any mystery never is. Stranger Things will never cease to shock you till its very last minute.

Some aspects not in the foreground, especially the romances were ridden with cliches. This was my only qualm with the storyline. Surely artists who have the capability to create such a deep intriguing series can put a little effort into their love story writing skills.

Generally, when it comes to movie cliches, the audience’s sentiment is  – Love me or Hate me, but you can’t ignore me. So while we may complain about cliches we must remember – they’re here to stay.

Finally, we have the details about Stranger Things Season 3. According to David Harbour, season 3 will come out in 2019. In an interview, David said, “You probably won’t get [season three] until sometime in 2019. Priah Ferguson who plays Lucas’ annoying younger sister is said to have a pivotal role to play. The producers have spared Noah Schnapp (Will Byers) the third season of Upside Down torture. While all existing characters are expected to reappear in the coming season Maya Hawke will be the new cast member joining the show.

Stranger Things is a super cool TV Show that doesn’t restrict itself to its genre (Sci-fi Thriller). It is a show much more than that. Despite having a theme that’s very narrow and not very inclusive, it successfully and inconspicuously throws light on various kinds of danger and abuse.

Keeping in mind the fickle sentiment of the characters as the plot progresses and adhering to the horror-Sci fi theme, the soundtrack is on point. The background score alone can give the chills. It has a reasonably fresh plot and is outstanding in its delivery. Stranger Things is the right mileage of entertainment, horror, Sci-Fi, and other popular genres.