Amsterdam-based MessageBird, world’s largest omnichannel cloud communications platform, On Thursday, 8 October 2020, announced that the company has raised $200 million in a Series C round. The company says that its platform is increasingly popular in the Middle East and even leveraged by Middle East’s ride-hailing unicorn Careem, Etisalat, OkaDoc and more.

The investment round was led by Silicon Valley’s Spark Capital at a $3 billion valuation with participation from Bonnier, Glynn Capital, LGT Lightstone, Longbow, Mousse Partners and New View Capital. As part of this latest investment Spark Capital General Partner Will Reed will join MessageBird’s board. Existing investors Accel, Atomico, and Y-Combinator also participated in this round.

The company will utilise the fresh funds to triple the size of the MessageBird’s global team and further expand into its core markets in Europe, Middle East, Asia and Latin America with the launch of a ‘Work from Anywhere’ policy. UAE and Egypt are key markets for MessageBird in the Middle East.

Founded in 2011 by Robert Vis, MessageBird remained bootstrapped for the first 6 years, then raising a seed round of $120K from Y Combinator in 2016, and raising one of the largest Series A rounds for a European software business i.e. a $60 million from Accel Partners and Atomico in 2017.

MessageBird claims that its platform is trusted by 15,000 established brands such as Lufthansa Airlines, Heineken, Hugo Boss, Rituals Cosmetics and SAP, as well as rapidly-growing disruptors such as Uber, HelloFresh, and Deliveroo. MessageBird is the only platform with preferred supplier relationships with all the major messaging platforms, enabling customers anywhere in the world to communicate and share rich media with any business instantly.

This latest investment, raised remotely during lockdown, comes on the back of a global surge in demand for a wider range of messaging-first customer communication tools, across a much broader range of channels, as global businesses struggle to cope with the pivot from physical in-store and call centre-based customer service to a fully remote workforce and online only sales. This accelerated MessageBird’s evolution from a purely Communications Platform as a Service (CPaaS) company to the world’s first and only Omnichannel Platform as a Service (OPaaS) company.

“I just want to live in a world where I can text with a business and never get stuck waiting on hold again. MessageBird has pioneered OPaaS (Omnichannel Platform as a Service) based on the idea that global companies should have zero-friction communication with their customers anywhere in the world and on any channel they prefer. This latest round is validation that there is pent up demand from customers all over the world who also want traditional businesses to move into this brave new messaging-first omnichannel world and we have the leading product on the market to help them do just that.”

“As consumers increasingly demand that businesses talk to them in the apps that they prefer, businesses are finally being forced to adopt omnichannel strategies at scale. Robert and the MessageBird team have built the best platform to engage any customer on any channel, globally – along with a suite of software products that enhance and automate these interactions – enabling businesses to stand out in the new messaging-first world.”

The company also adds that the one-third of the MessageBird’s 15,000 global users have transitioned to utilising omnichannel cloud communications via its Flowbuilder, Inbox or Omnichannel Widget products. 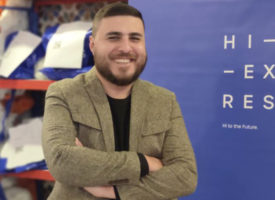