A couple of weeks ago Ayman Hariri, the founder of the social platform Vero caught people’s when he bashed Facebook and other social media platforms. This week we’ve got more.

Now, there is something that Hariri will be doing to make Vero a sustainable platform without hindering user privacy. Here’s how Hariri opened about it…

According to Arabian Business, Hariri says that Vero doesn’t require a large number of subscribers to become sustainable. The ad-free social app that has been free for users since its genesis – will be launching annual subscriptions for the new users in Q1 2020. The subscription fee will be equivalent to a couple of cups of coffee a year.

The platform was launched in 2015 as a take into the existing social media platforms like Facebook and others which mine user data for targeted advertising. The company earlier promised to give free subscriptions to first 1 million users, but they actually have given 5 million free subscriptions till date.

“We want to time [the launch of] subscriptions with some other activations we have going on, so we’re probably going to be [launching] that in Q1 of 2020.”

“Given the fact that I’m the investor in the company [Vero], we’re not on a timeline that’s similar to others. What we do, we do very properly, and we take opportunities to further our mission with the things that we build.”

Hariri has ensured to keep the platform ad-free and promised to be transparent with the users.

“Subscription and paying is the oldest form of transaction. It the simplest and most transparent form: for this money, you will give me a following thing, whether its access, ability to do something or service or product, and that’s where we want to be.”

“At some point, we will make money as well. Given our strategy, we don’t need the numbers that others need to attract advertisers and become a sustainable entity. Our sustainability requires much less. We have a smaller team. You look at a company like WhatsApp, who I have a lot of respect for in the way they were doing what they were doing at the time. I remember the three rules were: no gimmicks, no games, no ads.”

“You had to pay to download WhatsApp at one point and I’m sure they created revenue streams from carriers to ultimately give it to users for free, but their cost of user was very low and the numbers they had made it sustainable. In our case, we’re looking at subscriptions. We don’t need that many subscribers to be sustainable, and we have other methods of revenue.”

“not advertising – it’s a straight forward relationship that isn’t algorithmic.”

“If that person has something to post that is a product post, you see it because you follow them, not because they paid us an amount of money to have it show up on different people’s streams.” 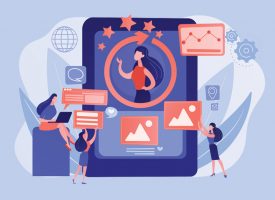