So the long-awaited results for the 17th General Election, 2019 are finally out. India has chosen Narendra Modi as the Prime Minister of India once again.

This also proves exit polls numbers right. This is the first time that a non-Congress party has won the elections second time in the row.

Together we will build a strong and inclusive India.

Politicians from all over India and rest of the world congratulated Modi for winning the General Elections 2019.

I accept the verdict of the people of India ??

Congratulations to the winners, Mr Modi & the NDA.

Thank you to the people of Wayanad for electing me as your MP.

Thank you also to the people of Amethi.

Thank you Congress workers & leaders for your hard work in this campaign.

In the dark of the night, when the others were in deep slumber, the Chowkidar kept awake. He went after corruption, gagged illegal money and gave a fitting response to terror attacks. The nation is upbeat, the economy will boom and investments will happen.#ElecctionResults2019

Congratulations @narendramodi on your election victory. I look forward to working with you and your government, further strengthening the already special relationship which exists between India and Zimbabwe @IndiainZimbabwe

Congratulations @narendramodi on your historic re-election as Prime Minister of India. Australia and India enjoy a strong, vibrant and strategic partnership, and our India Economic Strategy will take our ties to a new level. I look forward to meeting again soon.

I, on behalf of the people of Bhutan, offer heartiest congratulations to Prime Minister Shri Narendra Modi @PMOIndia and his team on the election victory. As we look forward to working closely in years to come, we pray India achieves greater success under your leadership.

I congratulate Sh Narendra Modi for this historic win and look forward to working together for the betterment of the people of Delhi.

Congratulations to Prime Minister @NarendraModi and his BJP party on their BIG election victory! Great things are in store for the US-India partnership with the return of PM Modi at the helm. I look forward to continuing our important work together!

I was pleased to talk to my dear friend Narendra Modi, India’s PM, over the phone to congratulate him on his party’s election win. We look forward to working together to deepen our strong bilateral ties. The UAE wishes India & its friendly people more development & prosperity.

I send warm congratulations to His Excellency Narendra Modi (@narendramodi) on the resounding victory of the BJP in the 2019 Indian general elections. Best wishes for his and the country’s success.

Vladimir Putin congratulated Prime Minister of India Narendra Modi on the victory of his Bharatiya Janata Party in the general election https://t.co/2KSK9SicJX

I congratulate Prime Minister Modi on the electoral victory of BJP and allies. Look forward to working with him for peace, progress and prosperity in South Asia

The prime opponent and the president of Congress, Rahul Gandhi congratulated Narendra Modi and said that he respects the decision of people.

Farooq Abdullah and Omar Abdullah congratulated Narendra Modi for his victory and at the same time, he made a request for bringing peace in J&K.

So, with that concludes the Lok-Sabha Elections 2019 and also the months-long fight between the parties. Let’s hope for the best to happen next.

Before leaving, please let us know your opinion on the General Elections in the comments below ⬇︎ 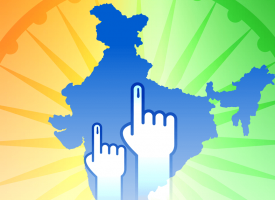