Salman Khan, Bollywood’s ‘Bhai’ has become the black sheep because of a blackbuck. The case in question is the infamous Blackbuck poaching case of a Blackbuck and Salman Khan. With a period of 20 years, this is a difficult case to follow especially for younger readings.

This black spot in Salman’s life began in the year 1998. While shooting for one of Bollywood’s biggest hits, Hum Saath Saath Hain, Salman was also shooting a Chinkara. On October 1st, 1998, Salman Khan, Saif Ali Khan, Sonali Bendre, Tabu and Neelam Kothari went on a hunting spree after a day of shooting for the movie. Apart from the actors, travel agent Dushyant Singh and Dinesh Gawre were also accused in the case.

The accused were charged with hunting and killing two blackbucks, which are protected animals under the Wildlife Protection Act. The deer was allegedly poached near a village of Bishnois, a community which is known for revering and protecting the blackbuck.

The villagers had come out of their homes hearing the gunshots on that night in 1998 and allegedly saw the actors fleeing in a jeep, and the deer carcass on the ground.

Salman Khan was booked under section 51 of the Wildlife Protection Act and the other actors also faced charges under the same section. However, read with section 149 of the IPC, they were also charged with unlawful assembly.

Salman Khan was also slapped with four cases of poaching and one charge under the Arms Act in Jodhpur in September-October 1998.

17th February 2006 – A conviction on Salman Khan was sought under the Wild Life Act for poaching. He was given a one year sentence and charged a fine of Rs. 5000. But this sentence was stayed by a higher court on appeal.

10th April 2006 – The same year, a five-year jail term was handed to me. Salman stayed in jail till 13th April, before a bail allowed a release.

24th July 2012 – Charges were reapplied on Salman and associates, 6 years later the trial was looking at a fresh start. A sessions court in Jodhpur presided by Judge Mahendra Maheshwari initiated the trial by seeking original documents submitted to the high court by the Rajasthan government that pertained to the case.

9th July 2014 – Salman Khan was acquitted of charges for the second time in this decision.

18th October 2016 – The Rajasthan government chose to approach the Supreme Court to challenge his acquittal in the previous trials.

18th January 2017 – Khan was declared innocent by a Jodhpur court in an Arms Act case linked to the killing of a blackbuck in Rajasthan. Khan pleaded “not guilty” to charges of violating the law by keeping unlicensed weapons; and using them due to insufficient evidence.

5th April 2018 – Judge Dev Kumar Khatri sentenced Salman Khan to five years in jail. His actor-accomplices were acquitted of the charges. Salman was taken to Jodhpur Central Jail as Prisoner No. 106. He spent two nights before being released on bail.

The Jodhpur court on May 7th adjourned until July 17 Salman Khan’s plea challenging the trial court order sentencing him to a five-year jail term in the blackbuck poaching case. District and Sessions Judge Chandra Kumar Songara adjourned the hearing after the defense counsel Mahesh Bora sought time to begin arguments.

After nearly 20 years of this case, a marginalized community in Jodhpur awaits justice for being wronged and disrespected. We know this isn’t the only tryst with the law by Salman. He was charged for running over a homeless man in the streets of Mumbai.

Now people have another topic of conversation and debate. Some people say that the court is in the better position than anybody to treat the case. While the Salman Khan fans still plead that Salman Khan is not guilty and should be bailed forever.

Does running a charitable cause, ‘Being Human’ pardon him from being inhumane in two different instances? Indeed, big brother is in trouble. Hum saath saath nahi hain.

We would like to know your opinion on this case. Please share your thoughts in the comments section below.

You also might wanna read: ‘Bhai is not guilty’: Dejected fans react to Salman Khan’s conviction in blackbuck poaching case 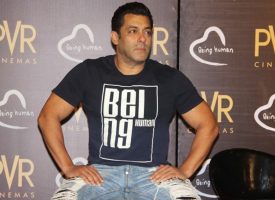