Home / Features / Analysis of the Saffron Industry of Kashmir

We all love the rich taste, vibrant color, and the presentation that a dash of saffron brings to various sweet as well as savory dishes. In fact, numerous recipes cannot be imagined without the addition of this spice. However, very little thought is given to where this saffron actually comes from. Did you know that most of the high-quality saffron in India comes from the northernmost part of India; Kashmir? To give you more insight into it, we talk about the saffron industry of Kashmir in this article.

Kashmir is a major producer of saffron not just in India but also the world with the Kashmiri saffron being the best in the world. Kashmir, in fact, is also the second-largest contributor to the spice in the global market.

The origin of saffron cultivation in the valley of Kashmir can be traced back to as early as 500 B.C. and there are several stories that suggest how it began. Although it is clearly not known how and when saffron cultivation began in Kashmir, some historic reports suggest that it was first sown in around 750 AD. The influx of Islam and Persian merchants into Kashmir has been connected with the start of saffron cultivation as well.

Well, no matter what the story of its origin may be, today, the best saffron in the world is synonymous with being from Kashmir. Although, Iran, Spain and Afghanistan also are known to produce saffron, but they don’t match the quality of their counterpart from Kashmir.

Pampore, a town situated around 13 kilometers away from Srinagar is the center of saffron cultivation in the valley.

The process of cultivation begins months before the spice is actually harvested. It is a pretty time consuming and labour intensive process.

At the onset of spring during the months of March or April, the preparations for the cultivation begin. The process begins with ploughing the land. A lot also depends on the weather conditions as the corms cannot be cultivated if the soil is moist. After initial ploughing, around 30 to 40 tonnes of manure is applied per hectare.

If the weather conditions are favorable, the soil is ploughed again for about 20 days continuously to obtain fine soil. The saffron farms also believe that it is important to again plough the field at the end of June to remove any unwanted plants. After this, until the month of August, the field is again continuously ploughed every 15 to 20 days.

After cultivating the saffron corms and harvesting them for the very first time, the saffron fields are left untouched until the next spring. Upon the arrival of next spring, the soil is aerated thrice before harvesting. Once cultivated, the lifespan of the saffron plant is around 10 to 15 years.

The plucking of flowers needs to be done very carefully using only hands. After this, the saffron is detached with utmost care from the flower. This labour intensive and time consuming process is what puts the hefty price tag that saffron carries.

Pampore produces an average of 2,128 kilograms of saffron every year. On some occasions, the produce reaches up to around 5,000 kilos. So, it is logical to say that most of the cheap saffron sold online is fake, or smuggled. According to CNN, a gram of pure saffron costs around 600 Indian Rupees.

After its production, the farmers distribute their saffron to adjoining areas. While a large quantity of it gets distributed to be sold locally, Kashmiri saffron is also exported to several parts of the world.

A lot of organizations and e-portals, such as Kashmirica.Com make it possible to make authentic saffron easily available to the masses and promote and recognize the efforts of the local farmers, have started selling Kashmiri saffron online. This also benefits the farmers as there are no middlemen involved.

Current State of the Saffron Industry

According to official figures, the annual production of saffron in the years 2017 and 2018 was 16.45 and 5.2 tonnes respectively and for 2019 the agricultural department estimates it to be 5.91 tonnes.

Dr. Amjad Hussaini, a SKAUST scientist said, “Drought like conditions, erratic rainfall, and no irrigation are the main reasons for the decline in saffron production,” and added that due to climate change, the pattern of rainfall had changed, which has had adverse effects on saffron.

Rapid influx of saffron from Iran and Afghanistan, and fakes present in the market have been the biggest challenge to the actual saffron farmers of the region. Irani saffron is sold at very low rates and is many a times smuggled. Afghani saffron also has entered the markets but its quality can’t even be compared to the one produced in Kashmir.

For the the government has instated GI tagging of saffron and once it takes full effect we hope for the fakes to reduce.

Overall, the condition of centuries old saffron industry of Kashmir is not that very pleasing. It requires the curbing of low quality smuggled crop from other countries and also strict regulations on the sale of substandard saffron. But it is hoped that, in the near future, the industry will stabilize and help the local farmer more than it used to. 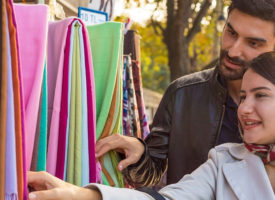 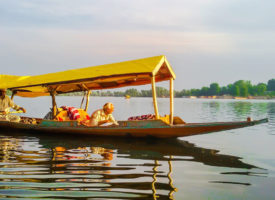 The State of the Tourism Industry in Kashmir 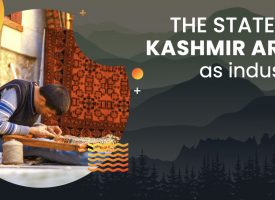 The state of Kashmir arts as an industry