The post incidents of serial bomb blasts in Sri Lanka has led to violence against the local Muslim community. Ever since the police named the two Islamist groups claiming the responsibility of the attacks, the situation has become terribly tough as anti-muslim riots have emerged.

13 May 2019, some mobs attacked 3 mosques, torched many shops and homes belonging to Muslim families in Kurunegala. It was the biggest rattle since 21st April Easter serial bomb blasts.

As reported by Reuters, the first death from the riots occurred on Monday when the mobs attacked a 45-year-old Muslim man with sharp carpentry weapons. He died post admission to the hospital in Puttalam district.

The police had imposed a nationwide night curfew on Monday. And now the government has also blocked social media platforms, including WhatsApp and Facebook to prevent the vicious clips and imagery from being spread among the masses. Army Commander Mahesh Senanayake said ‘The troops won’t hesitate to use maximum force against the mobs’.

On Tuesday, police arrested 23 people in Kottampitiya who were in connection with the riots. And the soldiers patrolled the towns affected by the riots in armored vehicles. The situation in under control for now and the Muslim residents are being taken care of by the police and the army. 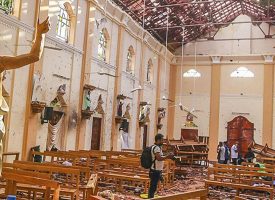